The delta variant of COVID-19 seems to have dealt the nation yet another blow on the road to economic recovery. Just as unemployment claims were headed in the right direction, new data released by the Labor Department shows a rise in the number of Americans filing first-time unemployment claims. Those claims unexpectedly rose to 419,000 last week, an increase of 51,000 from the previous week. 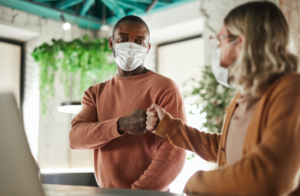 It’s hard to pinpoint exactly what led to that rise, but it could have to do with businesses closely monitoring the spread of the new delta variant and taking precautions. According to data compiled by Johns Hopkins University, the U.S. is reporting an average of about 43,700 new cases per day over the past week. While that’s still far below the pandemic high, it’s nearly three times the level we saw just two weeks earlier.

On Tuesday, the Centers for Disease Control and Prevention issued new guidelines regarding the use of masks. The CDC now says, people should once again wear masks while inside public settings in areas with elevated levels of COVID-19, regardless of vaccination status.

The recent surge has also thrown a wrench in many return-to-work plans. Tech giant Apple decided to postpone its plan of bringing employees back to the office three days a week in September to October. Other large corporations like Facebook, Slack and Square say they plan to stick with a mostly remote workforce for the time being.

All this comes on the heels of new unemployment guidelines released by the California Employment Development Department (EDD). As of July 11th, Californians receiving unemployment benefits are now required to show proof they’re actively searching for work in order to maintain their eligibility. Amid all this uncertainty, some are left wondering if small businesses that barely survived the first wave of the pandemic can stick out yet another round of possible restrictions and/or closures.

To review some of my more recent blogs related to COVID-19, vaccine and return to work issues, see below: