Just days after the federal government ended a number of temporary programs to help unemployed Americans make it through the pandemic, President Biden announced new initiatives in the fight against COVID-19. “The American people deserve an urgent, robust, and professional response to the growing public health and economic crisis caused by the coronavirus outbreak,” said President Biden. 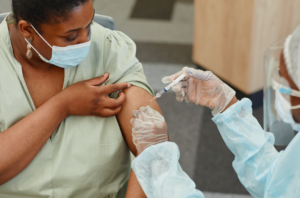 The Biden-Harris administration rolled out their seven-point plan to combat the ongoing epidemic, including imposing new vaccine requirements on federal workers, large employers, and health care staff. The new requirements could apply to as many as 100 million Americans, according to the White House.

In his speech, the President directed the Labor Department to require all businesses with 100 or more employees to have their staff vaccinated or tested once a week. In addition, he also plans to sign an executive order requiring all government employees, contractors, and educators in federal Head Start programs, and 17 million health care workers at facilities receiving funds from Medicare and Medicaid programs to be fully vaccinated.

The President also said the federal government will work to increase the supply of virus tests, and has secured concessions from retailers including Walmart, Amazon, and Kroger to sell at-home testing kits at cost beginning this week.

These new requirements come on heels of the federal government’s cut-off date for four temporary programs to help unemployed Americans impacted by the COVID-19 crisis. The programs, which ended on Saturday, September 4th, were providing well over $1 billion in aid to about 2.2 million Californians as of late August, according to the state Employment Development Department. Here’s a look at the programs that were affected: