There’s nearly no aspect of our lives that haven’t been changed by the COVID-19 pandemic over the last year-and-a-half. It’s affected our health, work, and personal lives, and has made the job of parenting even more complicated. According to results from the latest American Staffing Association Workforce Monitor online survey, more than six out of 10 U.S. adults with children under the age of 18 believe their child care and virtual schooling duties during the Covid-19 pandemic have negatively affected their ability to get ahead in their career. The association polled over 2,000 U.S. adults in June. 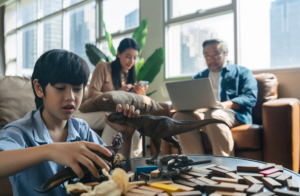 During an interview conducted by CNBC, American Staffing Association Workforce Monitor’s CEO said, “Parents are feeling left behind in their careers and in their workplaces. Some have come back, others have stayed on the sidelines because they couldn’t come back. As a society, this is another one of the big challenges.”

The survey also found people of color were more likely to say childcare duties have been a career obstacle during Covid-19. Seven in 10 Black parents and 62% of Hispanic parents believe their opportunities for career advancement were negatively affected by their childcare and virtual schooling duties; that’s compared with 51% of White parents. “The impact of COVID that we have seen has disproportionately impacted the populations in most need of assistance, according to the American Staffing Association Workforce Monitor CEO. “It’s the same old story.”

In an effort to address some of these obstacles and inequalities, the American Rescue Plan was signed into law in March. The plan was designed to build a bridge to an equitable economic recovery and immediately reduce child poverty.

The initiative included a national vaccination program, a plan to safely reopen schools and to deliver immediate relief to American families bearing the brunt of the crisis. Here are some of the benefits: