“Even though we face the difficulties of today and tomorrow, I still have a dream. It is a dream deeply rooted in the American dream. I have a dream that one day this nation will rise up and live out the true meaning of its creed: We hold these truths to be self-evident, that all men are created equal.” 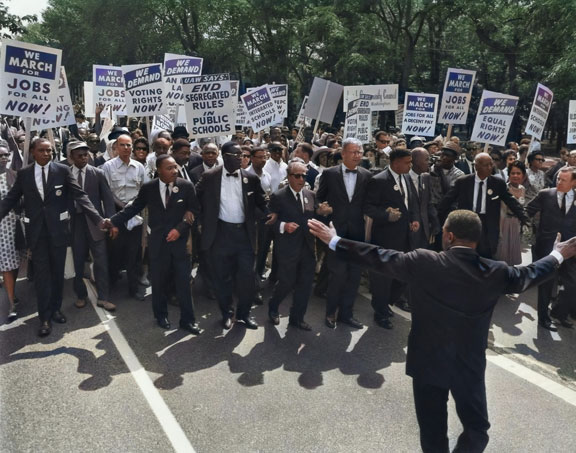 First proposed in 1979, Martin Luther King Jr. Day, or MLK Day, was eventually passed and signed into law in 1983. Although it did not take effect until three years later in 1986, the federal holiday is a celebration of the life and legacy of the man who challenged racial segregation and inequity in the United States. Dr. King was one of many who fought for the anti-discrimination laws we have today and believed in a brighter and more tolerant tomorrow.

Inspired by Gandhi’s ideals of nonviolence, Dr. King led and participated in sit-ins and marches with the aim of ending racial injustices. That included the 1963 “March on Washington” to protest civil rights abuses and employment discrimination. A crowd of about 250,000 people gathered peacefully on the National Mall in the nation’s capital where King delivered his most iconic speech, “I Have a Dream.”

The “March on Washington,” however, was not just a quick dream in the making. Decades earlier, American labor unions and civil rights activist Asa Philip Randolph first conceptualized a “march for jobs” to protest racial discrimination in the workplace, but that effort was stalled after the establishment of the Fair Employment Practice Committee (FEPC).

The FEPC was an executive order that banned discrimination in Defense Industries during World War II. Thanks to the persistence of Randolph and his fellow labor rights activists, President Roosevelt issued that order in 1941. But just five years later, the FEPC was dissolved, and Randolph looked to Dr. King for new inspiration.

When Randolph approached King about reviving his idea, he learned King and his Southern Christian Leadership Conference were already planning a “march for freedom.” So, the civil rights activists decided to combine their ideas, and the 1963 “March on Washington for Jobs and Freedom” was born.

A year later, in 1964, with Martin Luther King and other civil rights leaders in attendance, President  Lyndon B. Johnson signed the Civil Rights Act into law. The bill authorized the federal government to prevent prejudice in employment and voting and declared that discrimination for any reason on the basis of race, color, religion, sex, or national origin was illegal in the United States.

For information regarding resources for employers, businesses and employees, connect with me on LinkedIn for new updates, or contact me here.