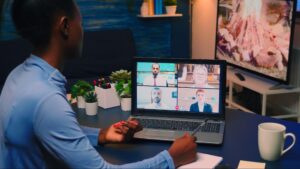 On December 7, 2021, Angela Reddock-Wright made an appearance on KNBC-4 TV news to discuss strategies for quitting your job without burning a bridge, in wake of the 2021 employment trend dubbed The Great Resignation.

To avoid any legal ramifications after resigning, Reddock-Wright suggests that workers be aware of whether their employment status is either “at-will” or under contract. “At-will” employees are able to leave their position at any time, for any reason, with no notice required. However, for any employee considering leaving, it is crucial that the employee  consider any confidentiality provisions, trademark non-disclosure agreements, and any other reason an employer can take legal action.

In terms of financial factors to consider, workers are encouraged to assess their ability to afford living expenses after resigning. Having a plan in place, such as a transition to another job or receiving unemployment benefits, is critical to ensure financial stability. However, as Reddock-Wright mentions in the segment, employees who quit are generally not entitled to UI benefits as opposed to being terminated by the employer

Other factors to consider are whether any employer matching contributions to your 401(k) will disappear if you haven’t made your own contributions, whether a new position has equal health benefits, how long it takes for those benefits to kick in, and if any bonuses will be paid out prior to resigning.

For additional resources which discuss how to resign without burning bridges, check out these online publications: