All Blogs | Diversity in the Workplace | Employee/Employer Resources 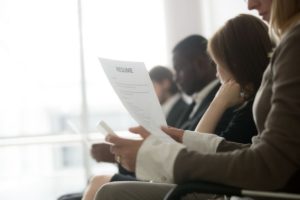 The financial impacts of COVID-19 have varied widely by race and ethnicity. In the month of May, overall unemployment rates improved as many businesses were permitted to reopen. While the numbers from the Department of Labor’s May jobs report show a decline in overall unemployment, they also show an increase in unemployment for Black Americans.

In January, 1.2 million Black Americans were unemployed. In May, that number rose to 3.3 million and continues to climb. The average unemployment rate for Black Americans was recently reported at almost 4% higher than the overall national average.

According to the data from the Department of Labor, less than half of working-aged Black people are currently employed. Pew Research Center surveyed Americans to explore the impact on their lives, and they revealed noticeable racial and ethnic differences in job losses and pay cuts. One survey conducted shows that 48% of Black adults are having difficulties paying bills. This is compared to 28% of Hispanic adults and 26% of White adults.

In communities of color, the labor market is known to be unsteady when the overall economy is strong. When the economy takes a downward turn, this becomes extremely hazardous for these communities. During the pandemic specifically, workers of color are overrepresented in many of the low-wage jobs that are most vulnerable to potential layoffs. They are also less likely to have jobs that allow them to telework and have fewer assets and less liquidity to financially respond to an emergency, according to research gathered by the Center for American Progress.

How Businesses/Employers Can Help Improve These Numbers Moving Forward

There are actions that businesses can take to help hire and retain Black employees:

Angela also is a member of the panel of distinguished mediators and arbitrators with Judicate West, a California company that represents the gold standard in dispute resolution. She also owns her own law firm, the Reddock Law Group of Los Angeles, specializing in workplace and Title IX discrimination, harassment and sexual assault investigations.