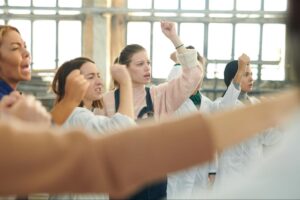 In December 2021, employees at a Starbucks location in Buffalo, New York established the corporation’s first unionized workplace – but it hasn’t stopped there. Since the unionization efforts began, Starbucks has allegedly terminated activist employees who say they were removed due to their involvement in union campaigns.

Now, U.S. labor officials are appealing the federal court to mandate that Starbucks rehire those activist employees. More specifically, the National Labor Relations Board’s (NLRB) Phoenix chief is attempting an injunction against Starbucks, requiring that they reinstate three employees that were thought to be illegally terminated, forced out of the company, or unjustly placed on unpaid leave due to campaigning efforts. Experts forecast a lengthy and expensive legal battle and possible harm to Starbucks’ reputation as a progressive company if union conflicts continue.

Meanwhile, the nearly decade-long legal battle between McDonald’s and the NLRB is coming to a close. In 2014, the NLRB alleged that the burger giant allegedly took retaliatory actions against employees who joined the Fight for $15 campaign. However, the U.S. Court of Appeals for the District of Columbia Circuit rejected a bid to reopen a case against McDonald’s. The Court refused the bid since the deal to resolve the charges against the company and its franchisees “was within the labor board’s discretion to approve,.” according to the court.

The eight year-old case had since grown into the largest NLRB suit to date, though experts believe the Court of Appeals opinion will close the longstanding argument. Though as the NLRB’s case against McDonald’s comes to a close, their suit against Starbucks has only just begun.

The ramp-up in unionization decisions and appeals is highlighted by an upcoming holiday: International Workers’ Day, otherwise known as “May Day.” The day was given significance in the 19th century, during the Industrial Revolution, to honor working men, women and children.  Among other issues, the Federation of Organized Trades and Labor Unions decided in 1884 to enforce the eight-hour workday starting May 1st, 1886.

Once May 1, 1886 came along, the Haymarket Riots began to support the eight-hour workday. Over 300,000 workers from 14,000 businesses went on strike, leading to future May Day strikes and walkouts.

Fast-forward to today, and 66 countries have adopted May Day as an official holiday. The day is celebrated by a mix of cultures and governments and is now seen as a commemoration to workers and laborers around the world.

Visit Angela’s blog for more information on related topics, or watch this Spectrum News 1 appearance for her take on the countrywide Starbucks unionization campaigns.

For Angela’s insights on cases like these, follow her on Facebook and Instagram @iamangelareddockwright.com, LinkedIn at angelareddock-wright, and tune-in to her radio show KBLA Talk 1580’s Legal Lens with Angela Reddock-Wright each Saturday and Sunday at 11am PST, or catch past episodes on Anchor.fm/Spotify. For media inquiries for Angela, please reach out to monty@kwsmdigital.com.