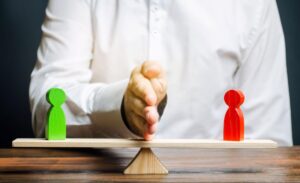 On March 3, 2022, President Biden signed H.R. 4445, otherwise known as the Ending Forced Arbitration of Sexual Assault and Sexual Harassment Act, to go into effect immediately. The amendment concerns mandatory arbitration in cases of sexual assault and harassment, a topic Angela touches on in her feature in the PACERMonitor article, “Employee Rights Under Siege as Arbitration Clauses Proliferate.”

H.R. 4445 reshapes the Federal Arbitration Act (FAA) to halt any predispute arbitration agreements or waivers regarding sexual assault or harassment disputes, so long as the alleged victim files a claim in court. The law ultimately offers potential victims the choice to take their dispute to court whether or not an arbitration agreement was signed.

The new amendment is meant to prohibit defendant employers from mandating arbitration for sexual harassment and assault disputes based on predispute arbitration agreements, and applies to all past and future agreements – including agreements that were signed before the law was put into effect. However, the amendment strictly applies to claims or disputes that arise either on or after March 3, 2022.

It’s important to note that this new amendment does not prohibit arbitration of sexual assault or sexual harassment disputes, but only prohibits employers from requiring arbitration if the basis of it is in a predispute agreement, or waiver. While employees will retain the right to arbitrate these disputes, the involved parties can also mutually agree to arbitrate over the events which led to the claim.

The recent introduction of H.R. 4445 sparks some new takeaways for employers, such as how the amendment will influence the litigation of cases involving sexual assault or harassment claims for employers who utilize arbitration agreements. Experts suggest that employers review the legal language within their current arbitration agreements and update their employee agreements to comply with the “Act”; knowing how to respond to the amendment is dependent on a number of variables, which is why working with an outside legal counsel could help employers settle on a course of action. For related content, visit our recent blog concerning SB 331, which expands laws limiting non-disclosure and non-disparagement provisions in employment discrimination and harassment cases.

To follow Angela’s insights on relevant and trending employment law and workplace issues, visit her website at and follow her on Facebook and Instagram @iamangelareddockwright.com.  You can also follow her on LinkedIn at angelareddock-wright, and tune-in to her radio show KBLA Talk 1580’s Legal Lens with Angela Reddock-Wright each Saturday and Sunday at 11am PST, or catch past episodes on Anchor.fm/Spotify. For media inquiries for Angela, please reach out to monty@kwsmdigital.com.