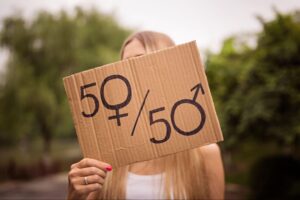 As you may know, Equal Pay Day took place this past Tuesday, March 15, 2022. The role of this date, according to the National Committee on Pay Equity, is to reflect how much further into the year women and minorities need to work before earning what men had earned the year prior.

According to NCPE leadership, they decided that Equal Pay Day would fall on a Tuesday in April to represent just how far into the next week women need to work in order to match what men earned the previous week. The chosen date is also convenient as it avoids religious holidays and other nationwide celebrations.

On this day, thousands of programs come together to engage in activities centered around closing the wage gap for women and people of color. From organized rallies and lobby days to speak-outs, letter-writing campaigns, and specialized workshops, local Equal Pay Day activists aim to tackle the pay equity issue in a number of ways. Perhaps the most widespread form of support is the donning of red clothing, which symbolizes how far “in the red” women and minorities are with their earnings.

Further details on the NCPE’s mission, such as fact sheets and legislation related to equal pay, are available on their website: pay-equity.org. Additionally, visit the Census Bureau website for key statistics such as the female-to-male earnings ratio over the past 60 years and a map of gender pay gaps by state.

To follow Angela’s insights on issues related to workplace inequality and the pay gap issue, visit her website at and follow her on Facebook and Instagram @iamangelareddockwright.com.  You can also follow her on LinkedIn at angelareddock-wright, and tune-in to her radio show KBLA Talk 1580’s Legal Lens with Angela Reddock-Wright each Saturday and Sunday at 11am PST, or catch past episodes on Anchor.fm/Spotify. For media inquiries for Angela, please reach out to monty@kwsmdigital.com.