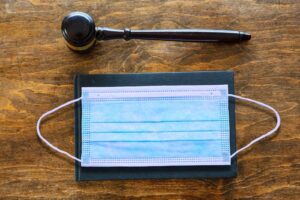 Continuing with our series on COVID-19 and the evolving workplace landscape, recent news has put California employers in the crosshairs of infected employees’ families. While difficulty in proving causality prevented such lawsuits in the past, employers in California now risk being sued in civil court for such injuries experienced by third parties.

This new development comes at the hands of a ruling in the See’s Candies, Inc. v. Superior Court of Los Angeles case which was filed in late December, 2021. The appellate court ruled that the wrongful death suit filed on behalf of the infected third party was supported, allowing it to proceed. The formal complaint summarized how a lack of social distancing in a See’s factory led to an outbreak among a group of employees. One of these employees then went home to pass the virus onto their spouse, a non-employee, resulting in the spouse’s death.

See’s Candies referenced the derivative injury doctrine, which broadly prevents third-party lawsuits for injuries not directly covered by California’s Workers’ Compensation Act. However the court rejected this argument, stating that any third parties who suffer injuries “logically and legally independent of any employee’s injuries,” due to an employer’s alleged negligence, maintain their right to sue.

The ruling wasn’t final, in that the affected third party wasn’t awarded due compensation. This is due to the difficulty victims face in proving that their infection stemmed from the workplace in question, or that an employer failed to comply with COVID-19 safety protocols.

However, it’s significant that an appellate court held that the third party should be able to file a claim in the first place. Similar lawsuits in the past, including the wave of COVID-19 nursing home deaths in late 2021, failed to gain traction due to issues with establishing causality. Moving forward, employers are expected to take the health of their employees’ families into higher account so as to avoid these civil suits, which have drawn more attention and legitimacy in recent months.

Recently, as the Host of KBLA Talk 1580’s Legal Lens with Angela Reddock-Wright radio show, I had a chance to interview civil rights and employment law attorney V. James (“Jim”) Di Simone on his recently filed case against the County of Riverside on behalf of his spouse and the family of Michael Haywood. Di Simone argues that Mr. Haywood died due to the County of Riverside failing to honor COVID-19 safety protocols in the workplace. Di Simone’s firm also claims that Mr. Haywood’s wife also suffered COVID-19, and the long haul effects of COVID-19, due to the County’s alleged failure to protect her husband. To listen to the interview with Attorney Di Simone, please check out my Spotify account here.