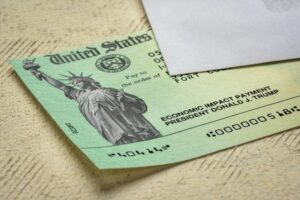 There has been a lot of speculation in the last month or so regarding a new stimulus package and if one will ever come into play. Congress previously passed the federal stimulus package, known as the CARES Act, to aid the families and businesses affected by the COVID-19 pandemic.

There has been some back and forth between Republicans and Democrats on what this new stimulus package should look like. This past week, the Republican members of the Senate presented their proposal for a second stimulus package. It is known as the HEALS Act (Health, Economic Assistance Liability Protection & Schools Act). The HEALS Act would address a handful of concerns, including the existence of a second stimulus check, unemployment benefits, and PPP loans.

This new stimulus package would be introduced through multiple bills:

This second check would have the same requirements as the first stimulus check. This would be a one-time, $1,200 check to those who qualified for the first:

Democrats also agree on a second stimulus check but have called for more focus on funding dependents (up to three), and some even think a $1,200 check is still not enough. There are some Democrats who have even suggested $2,000-a-month stimulus checks.

The deadline for Payment Protection Program loan applications is currently August 8. The HEALS Act looks to extend this program, allowing a small business with 300 or fewer employees to receive a second loan if their revenue has declined 50% or more during this unprecedented time. Democrats agree that the PPP loan availability needs to be extended as well.

A bipartisan bill must pass Congress before this proposal lands on the President’s desk. The House of Representatives is in summer recess starting on July 31. If they do not delay the summer recess, the new stimulus could be delayed until after Labor Day.