All Blogs | Employee/Employer Resources | Equal Rights in the Workplace 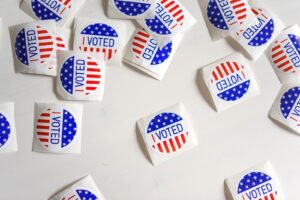 November 3rd is nearing, and many Americans are in the midst of voting at early voting poll locations and with mail-in-ballots. With a controversial election following this unprecedented year, the talk of politics is growing at home, on social media, and in the workplace.

Because of this, some companies are taking a stand on their employees’ ability to discuss politics at work. Recently, Coinbase, Inc. implemented a policy that bans any talk or debate of politics in the office. The Coinbase CEO Brian Armstrong stated that the company should not “advocate for any particular causes or candidates internally that are unrelated to our mission, because it is a distraction.”

With the implementation of this new policy, employees at Coinbase and other business leaders in the industry believe this is the wrong move. Many employees of the company disagree with this new rule and left the company after the announcement. They accepted a severance package that Armstrong offered to employees who do not agree with his ban on activism in the workplace.

Former Twitter CEO Dick Costolo is one of the many well-known individuals in the tech industry to comment against this decision. He stated that policies like this will negatively affect the tech industry’s culture, which used to “welcome lively debate about ideas and society.”

Should employees discuss politics at work?

With different opinions surrounding the subject, what is the best way to approach political discussions in the office?

Employers have a duty to promote and create equitable workplaces.  They do not want to create settings or promote or foster dialogues that cause any employee to feel marginalized based on political differences.

Angela is also a member of the panel of distinguished mediators and arbitrators with Judicate West, a California company that represents the gold standard in dispute resolution. She also owns her own law firm, the Reddock Law Group of Los Angeles, specializing in workplace and Title IX discrimination, harassment, and sexual assault investigations.

For more information regarding resources for employers, businesses, and employees during this time, connect with Angela on LinkedIn for new updates or contact her here.