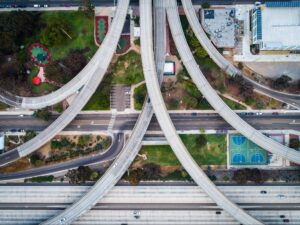 Yesterday, President Biden signed the Infrastructure Investment and Jobs Act (IIJA) to put over $1 trillion towards transportation, broadband, and utilities revamps. Although many are wondering how this will affect infrastructure in the coming years, others are curious about how many and what type of jobs will be created as a result.

On the topic of his new bill’s effect on employment, Biden referred to Wall Street projections which forecasted an additional two million jobs per year given that these packages see continuous investment. After further review, experts have found that the economy is likely to see around two million new jobs over the next 10 years, given that both the infrastructure and spending bills are passed. The Wall Street institution that Biden leaned on for these forecasts is called Moody’s Analytics.

What kind of jobs could result from Biden’s new package has been up for question since August of this year. With the massive construction and repair efforts required of the Infrastructure Investment and Jobs Act, workers in construction and manufacturing will be needed immediately to start the rebuilding process. Moody’s Analytics has forecasted that 650,000 jobs will open up as a result of President Biden’s signature, believing that these jobs could average around $70,000 per year, many of which will be in the manufacturing sector.

Some experts hold even more optimism for the future of the Infrastructure Investment and Jobs Act, estimating nearly one million job openings as a result of Biden’s new bill, with over 70% of them being available for non-college graduates.

Other experts are comparing New Deal spending levels to the current bill as a point of reference. If the second reconciliation budget goes into effect, nearly $500 billion will be dedicated to refreshed infrastructure over the next decade. This equates to $160 billion in government spending over the next five years. When combined with the Infrastructure Investment and Jobs Act, this level of infrastructure spending would surpass that of the New Deal.

All in all, the collective prediction is that Biden’s infrastructure bill will certainly open up the floodgates for construction and manufacturing positions. Moody’s has found that the over $1 trillion package can create hope for unemployed individuals – especially those without a college degree. For more information, browse these stories which speak more on the forecasted effects of President Biden’s recent infrastructure bill: