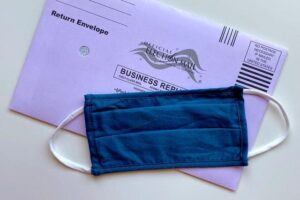 With such a controversial election approaching the end of an already unforgettable 2020, millions of American citizens have cast their ballots early. Amazingly, nation-wide pre-election voting has already surpassed 50% of all ballots that were cast in the 2016 election.

In California specifically, 21 million mail-in ballots were sent out this month to applicable residents. Even though many have opted to mail in their votes, some are still waiting until Election Day to vote in person on Tuesday, November 3rd. For those in California who do desire to vote in person, employers are legally obligated by the State to provide two hours of paid time off for voting, known as the California Voting Leave Law.

What are employees’ rights for taking time off to vote in California?

As an employee, it’s important to determine what rights you have under the law in terms of voting and what obligations your employer has with respect to voting rights in the workplace.

The California Voting Leave Law requires employers to inform employees in writing of their right to take paid time off to vote. Furthermore, employers are required to provide employees 2 hours of paid time off. Employers cannot force employees to use their vacation, sick, or Paid Time Off (PTO), however, employers can dictate if the time off is taken at the beginning or end of the employees’ work shift.

Employers can encourage employees to vote early and by mail. However, employees are not required to do so. The goal is to provide employees the most time off to vote while minimizing their time away from work. It’s important to note that employees must give employers 2 days-notice if they will need time off to vote.

Will Election Day ever be considered as a federal holiday?

By law, the presidential election takes place every four years on the first Tuesday after the first Monday in November. One thing that has been considered is making Election Day a federal holiday, which would provide the day off for millions of Americans. However, Congress has never enacted such a law. Some states do make Election Day a state holiday, such as New York, New Jersey, Hawaii, and Delaware. California has no such law but could choose to act in the future.

For now, many companies are providing a full paid day off to their employees as a way of encouraging them to exercise their right to vote. Gap, Coca-Cola, and Twitter are among several companies offering an entire paid day off. Old Navy is even giving its employees time off to work as poll workers.

Below is my commentary on this topic on Los Angeles’ KTLA-5:

Angela is also a member of the panel of distinguished mediators and arbitrators with Judicate West, a California company that represents the gold standard in dispute resolution. She also owns her own law firm, the Reddock Law Group of Los Angeles, specializing in workplace and Title IX discrimination, harassment, and sexual assault investigations.