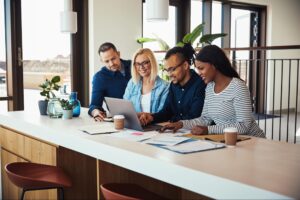 Several new employment laws have been cleared for 2022 this past year, adding and changing clauses concerning non-disclosure agreements, expansion of the CA Family Right Act, wage theft, and several others amid unprecedented back-to-work incentives. Although it’s not a new law, there’s another change that will go into effect come January 2022: the minimum wage increase in California. These next few blogs will continue to focus on the impending changes to the employment landscape in California.

In a world where workers are more willing to quit than ever before, the minimum wage increase may change that. However there are still groups that are struggling, such as parents with no access to childcare who are being forced to resign across the country due to nationwide school closures. A higher minimum wage can’t fix that – but “get back to work” incentives could.

Due to the significant labor shortages this year at the hands of COVID-19 and The Great Resignation, employers have gotten desperate. While some companies are mandating their employees to work in-person, others are instead offering perks to get their staff back to work. Some companies, such as the global real estate firm CoStar, are raffling off things like vacations via private jet, cash prizes amounting to $10,000, and even a Tesla vehicle to entice prospective employees.

A Tesla is unlikely to help a working parent handle their childcare needs, though many companies are offering flexible schedules and stipends for childcare or in-home care, which could be the answer for many single-parent families who’ve been forced to resign due to countrywide school closures.

Browse these online publications for more news and information concerning California’s upcoming minimum wage increase, as well as the explosion of back-to-work incentives this past year: