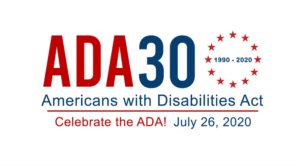 The Americans with Disabilities Act (ADA) is celebrating its 30th Anniversary on July 26, 2020. In light of this milestone, The U.S Department of Labor (DOL) also launched a yearlong celebration centered around the theme of “Increasing Access and Opportunity” that began in January.  The commemoration activities planned include speeches and new compliance assistance resources (You can find updates on the DOL’s efforts here).

Establishment of the ADA

The ADA was signed into law by President George H. W. Bush in 1990. According to the U.S. Department of Labor, the ADA is a landmark piece of civil rights legislation with the purpose of increasing the inclusion of people with disabilities in all aspects of community life, including employment. Americans with disabilities gained access to places and public services, such as employment and training programs, that were not possible before the ADA.

“The Americans with Disabilities Act broke down barriers to opportunity for millions of American workers,” U.S. Secretary of Labor Eugene Scalia said. “On this anniversary, we recognize and celebrate the access to opportunity created by the ADA. Together with our strong economy, the Act has led to historically low unemployment for American workers with disabilities.”

According to the U.S. Equal Employment Opportunity Commission (EEOC), disability discrimination occurs when an employer or other entity covered by the ADA treats a qualified individual with a disability who is an employee or applicant unfavorably because of their disability.  It can occur during hiring, termination, wages, training, and promotion opportunities.

The United States Census Bureau stated in 2019 that 9 million people with a disability make up our workforce. The Washington Post found that that between the years of 2010-2017, more than 1 million employment discrimination complaints were filed with the government. Of that number, 252,599 were related to disability or medical discrimination.

In 2014, almost 60% of employment discrimination charges filed in the United States under the ADA were related to discharge, and about 31% involved issues regarding reasonable accommodation. Other common charges filed included terms/conditions, harassment, and discipline.

Tips for Preventing Disability Discrimination in the Workplace

Below are 5 tips for employers to ensure they are compliant with the ADA and are creating equal access and opportunity for all employees in the workplace, particularly disabled employees:

Angela Reddock-Wright is currently available to speak on disability discrimination in the workplace and how employers can ensure they are ADA compliant. You can view Angela’s recent appearance on Spectrum News 1 where she discusses the impact of the ADA 30 years later and its relevance to managing issues of COVID-19 in the workplace here.

For more information and resources regarding the ADA 30-Year Anniversary, visit www.adaanniversary.org